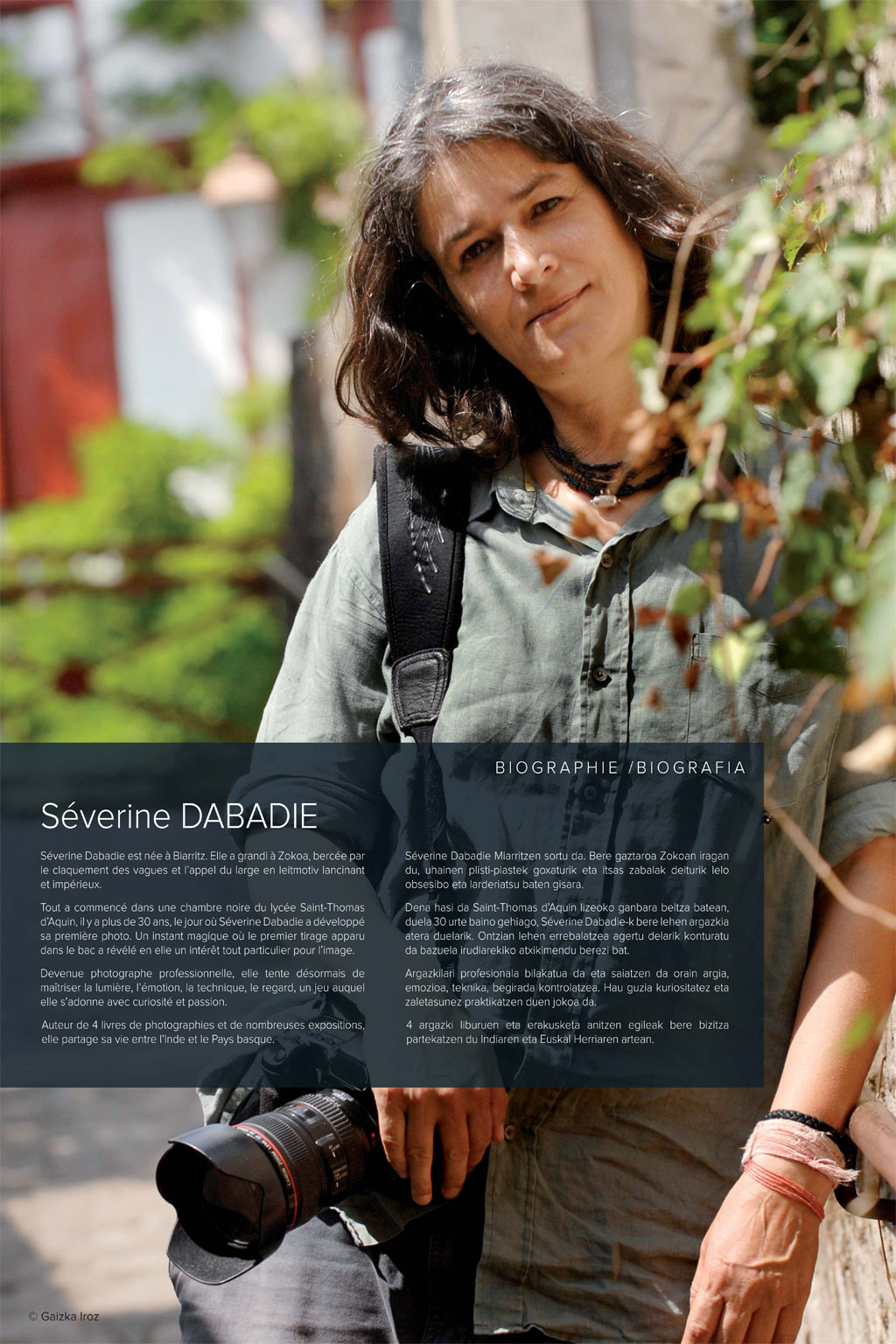 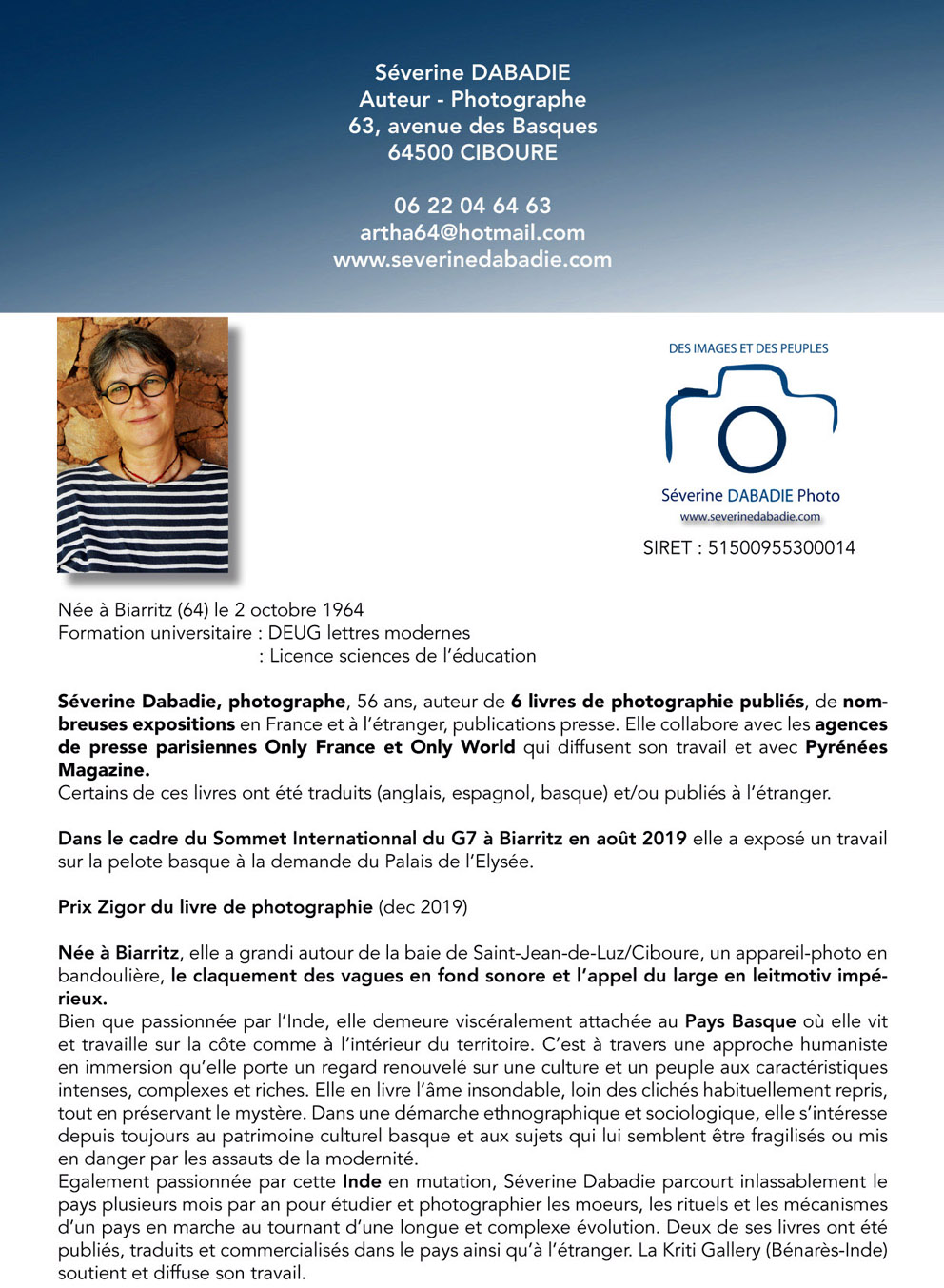 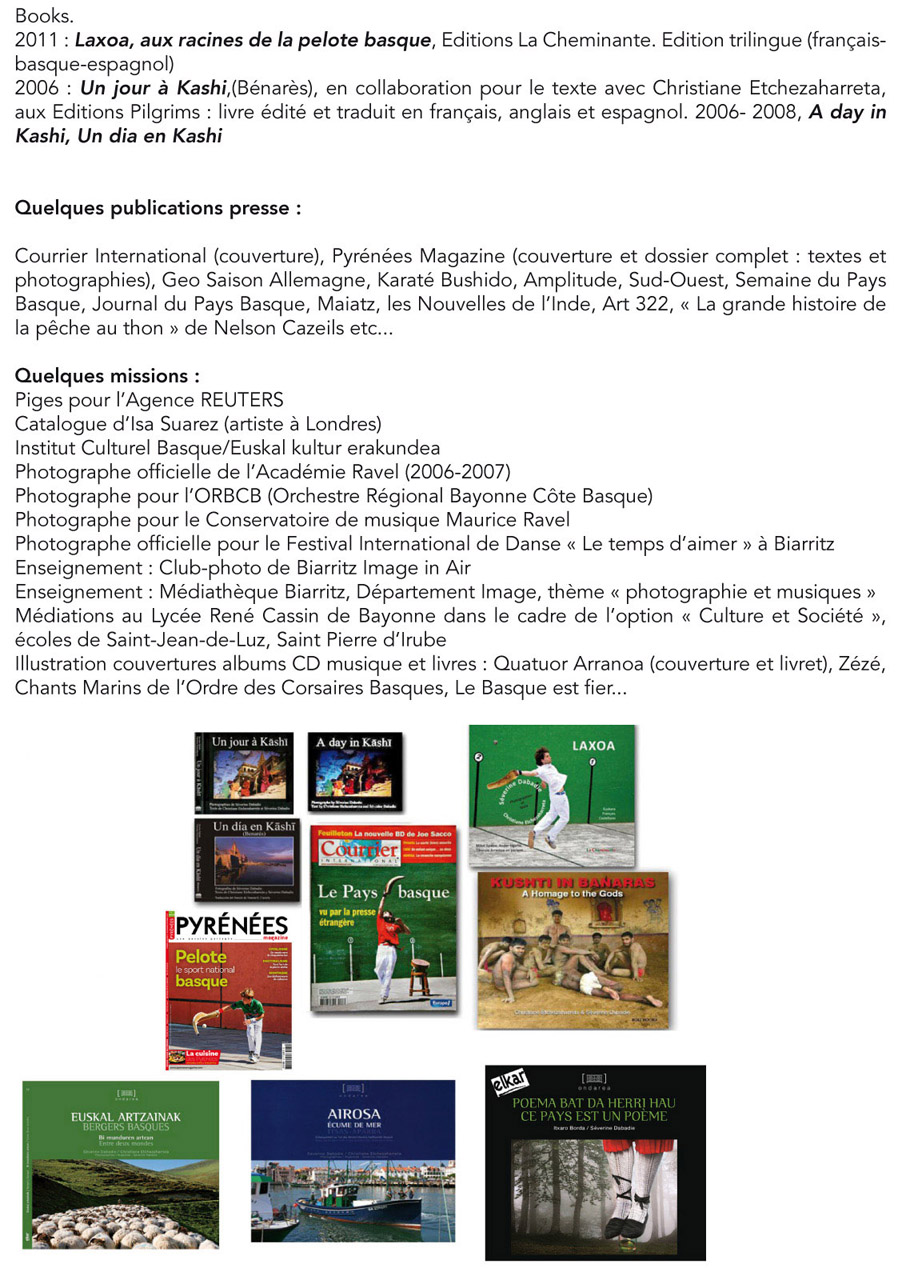 SÉVERINE DABADIE IS A PROFESIONAL PHOTOGRAPHER REPRESENTED IN FRANCE BY THE AGENCY ANA (PARIS), BY ONLY FRANCE (PARIS), ONLY WORLD (PARIS) AND IN INDIA BY THE KRITI GALLERY (BÉNARÈS)

The magic moment when the first print appears in the tray revealed in me a special interest for images. In photography, the goal should not be an obstacle. It is a prism in which we observe humanity, benevolence, fascination, beauty. An imaginary world must merge with reality, a process of transfiguration has to take place. By an immediate operation that is taking the photograph, the suggestion must take precedence over mere description or illustration. As advocated by Arthur Rimbaud, it is imperative to be a "voyant" and turn its attention beyond appearances.
I consider photography as an inner journey, a personal quest, an upgrading of values, openness to the world and people, a way to escape from Platon's cave.
The photograph made me travel and see the world which you will see in my previous work
Born in Biarritz in the Basque country, I grew up in Zokoa, the slamming of waves as a background and the call of the sea as a Leitmotiv haunting and compelling.
Fundamentally I believe that photography can rise to the level of poetry, it allows us to decipher the mysterious signals scattered in every corner of the world.
Most important for me is that photography can highlight the unfathomable soul of landscapes, people, while retaining their mystery, it can highlight the inner beauty of this aesthetic and that spring up in the deeper meaning.
Photography is at it’s best when "head, eye and heart on the same line of sight" as told Cartier-Bresson.

Work and past projects


The practice of photography since 1998 led me to present several exhibitions in the Basque Country (French and Spanish) first and then to Toulouse, Paris, London and Banaras (India).
In 2000 the official program of the Festival Biarritz Terre d'Images exhibited my entitled work "Rising Nepal".
In 2001, I participated in Biltzar of photography in St Jean Pied de Port.
In 2003 after joining the team of the Festival Biarritz Terre d'Images, I became the curator of the exhibition "Amerikanoak" which pays tribute to the Basque diaspora, under the theme developed in that year: « exile ».
In 2004 at the Festival BiarritzTerre d’Images my work from my first trip of several months in Banaras (India) was shown.
It was an enthusiastic welcome which made me continue my research in India and especially in Banaras. Since 2003, I spend half of the year in India, and the other half in the Basque Country where I'm still attached to my roots. From that moment I enjoy two very different sides and complementary work, it’s my vital inspiration I feel that as a breathing, drawing on both sides.


My various trips to India resulted in a first Indian publication in that of a book of 280 pages containing text written in collaboration with Christiane Etchezaharreta to be my partner on editorial projects maturing in my mind. "A day in Kashi" (Pilgrims Publishing) is also translated in French "Un jour à Kashi" and Spanish "Un dia in Kashi." This book published in France, Spain, India, Nepal and the United States met with some success and allows me to consider new projects and thus better market my work. Not wishing to be recognized only for my Indian photographs, I'm starting on a long-term project concerning the practice of Laxoa, the ancestor of all forms of Basque game and yet relatively unknown since it is practiced only by sixty players in the valley of Baztan. Born in March 2011 when "laxoa, aux racines de la pelote basque" (Editions La Cheminante). The subject brings us to achieve a trilingual edition (French, Basque, Spanish) distributed throughout the French territory and Spain. Text and interviews are conducted in collaboration with Christiane Etchezaharreta. Several trips to Benares allowed me to work on a subject difficult to achieve: that of the Indian wrestling called Kushti. It will, for the process, learn the Hindi language and arm themselves with great patience and perseverance in this environment very masculine and very rigid. The book released in December 2011 with the title "Kushti in Banaras (wrestling as a homage to the gods)" (Roli books Publishing). It is written in English with the collaboration of Christiane Etchezaharreta.

September 2013: publication Editions Elkar a book of photographs entitled "Airosa -Ecume de mer / Itsas Aparra". Bilingual texts Basque and French written in collaboration with Christiane Etchezaharreta accompanying images. This is a sensitive story aboard the oldest boat Airosa the port of St Jean de Luz (61 years and historical monument) to photograph the purse seine fishing and working the pole and the live bait, in pursuit of the bluefin tuna. It is a tribute to the sailors who practice responsible and rational fishing and this beautiful boat, Airosa before modern times have completely overwhelmed with foam still our vibrant past.

More than 30 years after the publication of Jacques Blot's reference book, Artzainak, Séverine Dabadie (photographer and author) and Christiane Etchezaharreta (author) attempted to draw up an inventory of Basque pastoralism. For several months, they have walked the Basque mountain to encounter numerous herdsmen from all walks of life, from all ages, from all origins, men, women, elders, young people, landless shepherds, shepherds from Shepherds, pastoral workers not from the Basque Country and watching the voluminous herds of Irati, men pursuing the trade by tradition and even a shepherd anthropologist.
Far from being a homogeneous world, all have given of their time, have shared their passion and their love of the mountain to testify.
Thanked.
There is no "pastoralism" but "pastoralism". This world is infinitely rich. It obliges us so much to turn our gaze towards the future, so much towards the past. Basque pastoralism no longer resembles the image of Epinal that postcards would still impose on us. It is a changing world navigating between modernity and tradition. Times have changed, bringing pastoralism in its wake. However, good news! If sometimes the task is rough, the shepherds have been able to adapt. They have used this millennial tradition to enter the 21st century with the fierce desire to perpetuate these know-how, these lifestyles, the deep desire to offer consumers the best products and above all to make the mountain live.

As my work became known, the proposals became more frequent. 8 pages of an article released in the martial arts magazine "Karate Bushido," another of 4 pages in the magazine "Amplitude". In 2009, after presenting my photographs at the Festival "Visa pour l'Image" in Perpignan, I joined the photo agency Sunset (Paris) and a few months later, the agency Ana (Paris). Both are based in Paris and will result in numerous other publications including the cover of the magazine "Courrier International" in the summer of 2010.


The Basque Cultural Institute called me repeatedly: "Danyel Waro: residence in Aquitaine." Follow in 2004 and 2005 further orders on the subject of Basque improvisers called "bertsulari" then at "Dating around Sylvain Luc" (jazz guitarist), and "Musicians Yakuts to meet the Basque musicians." In 2003, the association Itsas Begia, preserving the Basque maritime heritage, my mandate as a photographer for the preparation of a project to build boats in Newfoundland and coastal Labrador in Canada. The Maurice Ravel Academy, which annually receives in Ciboure top young musicians, agree as official photographer. Then my interest in classical music reveals and gives rise to an order from the Regional Orchestra of Bayonne Basque Coast. Of these two commands, also follows my statement next (spring 2012) in the Media from Biarritz to delivering training workshops on "photography and music." I became also official photographer in 2010 and 2011 the International Dance Festival "Le temps d'aimer" in Biarritz, covering all shows.