BOOK: KUSHTI. Wrestling as a homage to the Gods

To purchase the book (which is not yet distributed in Europe), please send a message to the author (see contact section). 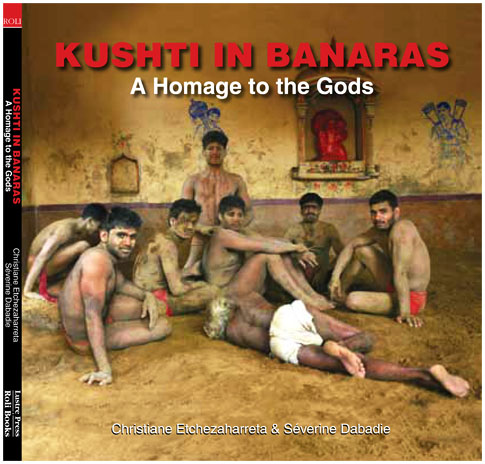 One practice the wrestling throughout northern India but in Banaras, she holds a special place. Akharas were very numerous. They closed their doors one after the other. Wrestling in India, especially in Varanasi, since immemorial time was very popular. Some form of wrestling preceded the Mughal invasions on the eleventh century. Bharatiya Kushti (Indian wrestling) or simply kushti: such is its name.
In a country where religion permeates every act of daily life, Indian wrestling, Kushti, has, like music, beyond religious boundaries. The Mughals made a strong impress on its identity and Hindus introduced the rituals to the deities of the Hindu pantheon, mainly the monkey-God Hanuman. It is a reconciliation of body and mind, a worship of deep human values, a world for gods, to an ideal.
Indian wrestling is more than just a sport or physical activity. It is a healthy and strict discipline of life. It is a journey toward spirituality which combines body and soul. It is practiced in a "akhara." Here is the definition given by former wrestler Patodi.

"‘What is an akhara? It is a place of recreation for youth. It is a shrine of strength where earth is turned into gold. It is a sign of masculinity and the assembly hall of invigorated youth. Strength is measured against strength and moves and counter moves are born and developed. An akhara should be in an open area where fresh air and sunshine mingle. It should be away from dirt and filth and in a place where the earth is soft. It should be set off by a boundary of some sort and surrounded by thick foliated trees. There should be water nearby. One should enter the akhara after paying obeisance and offering up incense to the Lord. An akhara is where one prays and where offerings are given and distributed. Its earth is saluted and taken up to anoint one’s shoulders and head.
And then one wrestles and the sound of slapping thighs and pounding chests fills the air. Grunts and groans of exertion echo ominously. One trounces and in turn is trounced. Exercise is done. Laziness and procrastination are drowned in sweat. The earth is mixed and finally one salutes the pit and leaves." Patodi 1973

Several long journeys took me back to those same places with Christiane Etchezaharreta with whom I used to work with always as much happiness. Our presence became obvious. The smell of sweat in the middle of the body that rattled and jostled, we watched the training, in the dim light of early Indians morning. Life resumed its course, imperturbable as the Ganges flowed. My camera captured these rare moments where the bodies were intertwined with power and sensuality, softness and strength. It is this bond paradoxical continually brought me back here. For three years I worked tirelessly on this issue and learn the Hindi language quickly became an absolute necessity because no one spoke English ... Even less French. Often it was difficult to convince some Indians that we were working on the wrestling and that we used to attend Akharas. Because it is a world within a world where two women, Western moreover, can not find a place easily.
Rare and beautiful moments that were given to us to live in these Akharas and especially in that of Gaya Seth is a wonderful gift. This is also why we wanted to share them through this book published in English by Roli Books (India): Kushti: wrestling as a homage to the Gods.